Multi-Directional Training for Athletics and Life 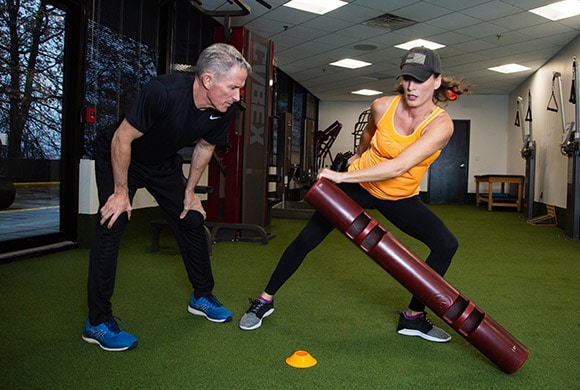 Too often the training programs of athletes, and general fitness exercisers, have an overemphasis on sagittal plane exercises such as the Power Lifts (squats, dead lifts, bench presses), Olympic Lifts (snatches, cleans {and their variations}), pullups, pull downs and rows. These popular lifts can be extremely valuable for both athletes and fitness enthusiasts. However, the power and Olympic lifts have been around for so long that these exercises have unfortunately become almost synonymous with athletic conditioning and staples for many general fitness exercisers. We should remember that power lifting and Olympic lifting are actually sports in and of themselves. The training programs for athletes competing in these sports definitely should have a primary emphasis on these movements, and success in these sports can legitimately be measured by the amount of weight one can lift in these movements. But just because a power lifters success can be measured by his one repetition maximum in the dead lift, squat or bench press, the success of most other athletes definitely should not be. Nevertheless, almost every high school and college weight room in the country has a leader board posting the strongest players on the team, as measured by the maximum weight they have achieved in these lifts. The players whose names appear on these leader boards are often the coach’s most respected players. The father of one of our over-achieving 115 pound female lacrosse players, now away playing in college, proudly sent us a video clip of his daughter deadlifting over 300 pounds during her college strength and conditioning program, and receiving congratulations by her team mates and coaches. Our first thoughts – “I sure hope she doesn’t injure herself, and, what does doing a one repetition maximum dead lift have to do with the very aerobically demanding, multidirectional game of lacrosse?” But the fact that there is little to no correlation between an athlete’s maximum strength with the Olympic or power lifts, and her/his performance on the lacrosse, softball, baseball, football etc. field, is not the main concern. The greater concern is the possibility that too much of an emphasis on these lifts could take away from time devoted to more multidirectional movement training and could actually even hinder an athlete’s performance.

One of the body’s adaptations to doing a very high volume of sagittal plane exercises with extremely heavy loads is to develop great protective stability (stiffness) for those exercises. This stability can actually restrict speed, fluidity, range of motion, and power in other planes of movement. Imagine if a professional golfer went on a six month power lifting regimen and gained ten pounds of muscle and increased his squat, bench press and dead lift by 50%. It is quite possible that his golf game would actually decline instead of improve. This does not mean that athletes should not perform heavily loaded sagittal plane exercises. However, such exercises, if utilized, should definitely not be the mainstays of the golfers exercise program. Does this mean that the golfer (golf being a transverse plane [rotation] dominated sport, with a very light load [golf club], and an extremely high velocity [swing speed]) should never do any heavily loaded sagittal plane lifts? Some might argue that to be the case. Others might argue that the posterior core strengthening, the hormonal stimulation, the explosiveness, the muscle building, or numerous other benefits of these lifts, all make them valuable components of the strength and conditioning regimen of a golfer. The purpose of this article is not to profess that we have the definitive answer to this question. However, at a minimum, we hope it is apparent that a strength training regimen that over-emphasizes sagittal plane training could do so at the expense of multidirectional training that could provide even greater value. So, if our golfer is to include sagittal plane lifts, at a minimum we should also make sure he is including at least as much transverse and frontal plane strength training, in addition of course to static and dynamic flexibility work and plenty of swings (skill specific practice).

The same principle holds true for the vast majority of us who exercise for health, fitness and performance enhancement in the game of life. Most of what we do every day – walking, running, reaching, turning, lifting, placing, and every other movement or combination of movements in between involve lateral or rotational components. For this reason, at 1 TO 1, all of our clients, from our youth and adult athletes to our senior citizens and everyone in between, train in all directions, the way the body was meant to move and in ways that will keep them strong, agile, mobile, and safe no matter what physical challenges life brings.